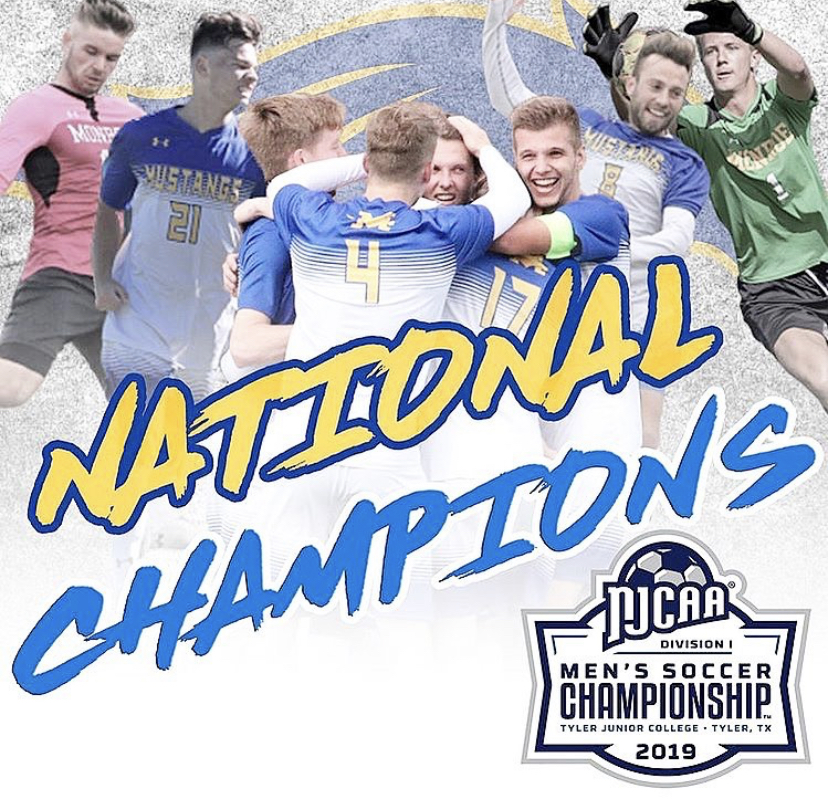 The ultimate goal has finally been reached! The Monroe College Mustangs Men’s Soccer Team wins its first-ever NJCAA Championship. Playing in the NJCAA Div. I Men’s Soccer Championship finals for the fourth time since 2011, the top-seeded Mustangs got over the hump in November 2019, defeating No. 4 Eastern Florida State College 2-1.

A dream season for the Mustangs ends in perfection, as they cap off 2019 with an undefeated record of 18-0. Our player’s Tobias Pellio, Daniel Haegler, and Luca Erhardt played a crucial role in achieving such a historical season. This enabled them to move from a Junior College in New York to top NCAA programs around the USA.

Head Coach DiBernardo has reached the NJCAA Championship finals in 2011, 2014 and 2016, but ultimately fell in each championship game. With their 2-1 title victory over No. 4 Eastern Florida State College, the Mustangs finish a season undefeated for the first time ever. Winning all 18 of their 2019 contests, and ranked No. 1 in the nation from the first week of the rankings until the final week.

The turning point of the game came with five minutes left on the clock as the Mustangs were awarded a penalty with the scoreline at 1-1. Tobias Pellio, who scored twice in Monroe’s 3-0 semifinal victory over No. 11 Illinois Central College, was chosen to take the penalty kick. Pellio blasted it to the left, and the goalie guessed the opposite to put the Mustangs ahead, 2-1.

Luca Erhardt also collected several awards after an astonishing second season for the Mustangs. After scoring 31 goals and adding 6 assists in 18 games he is the 2019 NJCAA Division 1 Top Scorer, leading in points with 68, and is voted to the NJCAA First Team All Americans as well as United Soccer Coaches All-America First Team.

Daniel Haegler was picked to the All-Tournament Team after winning the final. He scored 8 goals and had 6 assists to help the Mustangs finish the 18-0 season.

“The players first and foremost are the guys who won the championship. They did it every single day in practice and all 18 games. They took care of themselves responsibly throughout the year. They were mentally ready and over the course of the season, they became friends and they respected each other. You have to want to play for each other to win together, and they did that,” said DiBernardo. He also praised his staff and the incredible support system at Monroe. It’s a family environment and everybody on campus feels vested in the successes of the athletic teams.

Tobias and Daniel decided to move to Florida and join some of the best D2 programs nationwide. But they will go separate ways. At least they will meet again as both programs play in the toughest conference in the D2, the Sunshine State Conference. Tobias Pellio accepted an offer from Nova Southeastern University in Fort Lauderdale, Florida. He already joined the team for the spring semester 2020. Daniel Haegler accepted an offer from Barry University in Miami Shores, Florida. He will finish his freshman year in New York before moving to Florida in the Fall 2020.