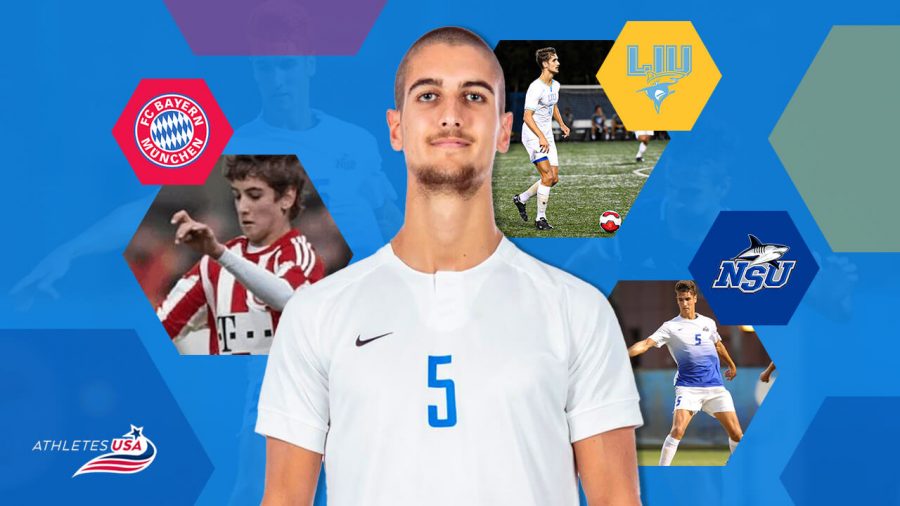 In an Interview with Austrian Sports News Channel LAOLA1, Faistenauer tells his story of how he once came from Tyrol to join the youth academy of the German record champion, FC Bayern München, to go on and play college soccer in the USA.

In the morning, Stefan Faistenauer likes to run on the beach or train in a gym right next to the beach. After work, swimming is always popular or reading a book on the beach.

It could really be worse than spending your home office in Miami.

Ten years ago, the plan was very different. Then, there is the dream to one day put on the FC Bayern München jersey for many young people.

Stefan Faistenauer fulfilled this dream as a teenager.

However, the dream of a great professional career failed, as it inevitably has to burst for most young people who set out to make it big at the age of 14. As is well known, only very few kickers manage that.

However, this does not mean that you cannot have an exciting career outside of a soccer career. 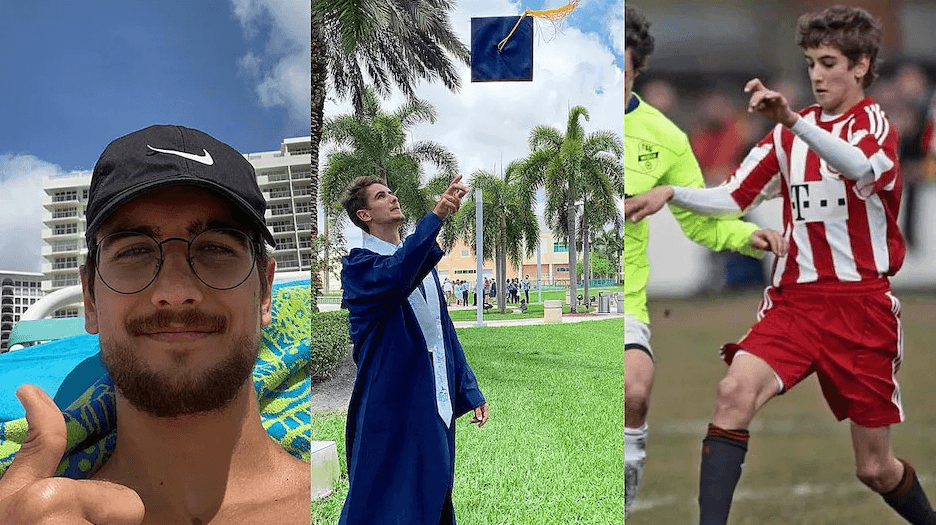 The contact to Stefan Faistenauer resulted from this story about the previous Austrians in the Bayern youth:

Many of these gentlemen are known from professional football; you don’t necessarily have to be David Alaba or Alessandro Schöpf. The doorbell rang less when one heard the name Stefan Faistenauer, although the athletic resume sounded quite interesting.

“I played a test match against Bayern with the Tyrolean Country Selection and apparently I was convincing”, remembers Faistenauer, “then I was invited to a training session every quarter. After these four units, I was offered the opportunity to transfer to Munich for the next season.”

The fact that two more Tyrolean talents, Schöpf and Marco Friedl, enjoyed their football training in Munich at the same time played a role.

“Since I continued to attend high school in Wörgl and my parents weren’t able to drive me to training every day, it only worked because Bayern provided us with a VW bus. So Marco’s mother drove us – and that includes the Rosenheim and Bad Aibling kids – four times a week to training”, explains Faistenauer.

He only met Schöpf later in Munich. “Since he comes from Längenfeld, commuting was never an option for him because it is too far.”

The current FC Schalke professional, Alessandro Schöpf, and SV Werder Bremen legionnaire, Marco Friedl, stayed with Bayern for many years. Things didn’t go as well for Faistenauer. As a result, he stayed from summer 2010 to summer 2011.

Difficulties making connections – on and off the pitch

“Unfortunately, I tore my patellar tendon a week before the start of training and had only been in the rehab center for a few months. In addition, I had a growth spurt of 20 centimeters this year, so my body didn’t quite play along.”

Among other things, the central defender missed a training camp in Qatar. Instead, it was rehabilitation training in Munich for him. The social aspect, which is so important at this age, also fell short through his injury.

“To be honest, I had difficulties connecting with the team through all of this – in terms of football, but also off the pitch. I felt I spent more time with the injured players or players from Bayern’s second team. Above all, Austrians like Christian Derflinger, Alessandro Schöpf, or David Alaba rather than with my team.”

Towards the end of the season, he played a few more games. “Still, I had to ask myself whether I wanted to start the new season as a substitute because at that time the other players were simply more advanced than me, or whether I was going to take on a new task and want to bring back the joy of football with the experience of playing matches?”

The answer was a change to the youth of the SpVgg Unterhaching. Faistenauer spent the 2011/12 season at the Munich suburb club.

“Manfred Schwabl supported me there right from the start and linked me with physios, acupuncture, etc. to get my body under control again,” remembers Faistenauer, who also found the desired fun in football again – which tended to be particularly important:

“In Haching, I had a great time with some solid kickers with a similar background from the academies of 1860 Munich, Bayern, or Augsburg. I am still good friends with some of the players from the Haching times. In addition, four other players from my team at that time are in the United States and came here to play college soccer and study.”

Education is a good keyword. Faistenauer returned to Tyrol in the summer of 2012 – first to FC Wacker Innsbruck, then stops at FC Kufstein and SC Schwaz.

“The move back to Tyrol was an active decision to give priority to a school career. The journey to Innsbruck by train was a lot faster than to Haching”, explains Faistenauer.

“Unfortunately, I didn’t have the foresight initially but thank God my mom prevailed by putting education first and then football. That’s why I went through with the BRG Wörgl and didn’t go to boarding school in Germany. During my bachelor’s degree, I slowly learned to understand the importance of education and found my enthusiasm for an economic career rather than chasing the ball.” 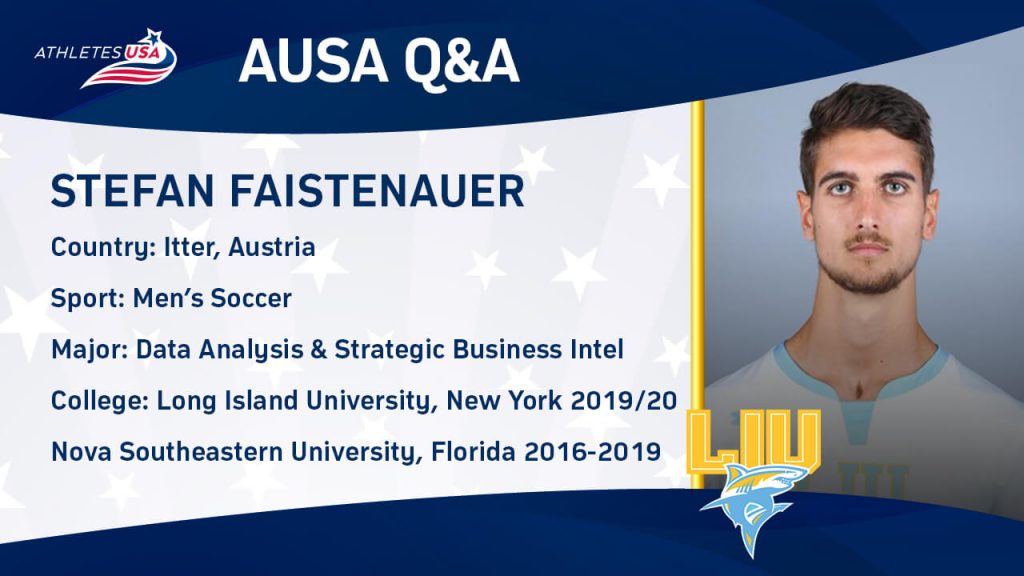 Farewell to the Dream of Professional Football

Even at the beginning of this chapter, football played more than just a minor role. Before that, however, the dream of a professional career – and preferably with FC Bayern – had to be left behind.

“I’ve been playing football since I was three years old. Of course, it was my big dream to someday earn my living as a professional”, admits Faistenauer, who from today’s perspective can admit with a broad grin that in this dream FC Bayern in truth did not play the main role at all:

“To be honest, I was never a big fan of Bayern as a child; I always liked Borussia Dortmund. But I saw the opportunity at Bayern as a huge opportunity because everyone in the world knew this club. So I knew that one or the other door would open for me later.”

With a Highlight Tape to a University in Florida

“I first heard of recruiting agencies that refer Europeans to America through a former player in the Regionalliga West at Schwaz. So I signed up with such an agency and was promoted to US colleges through a highlight tape. Then I had about 30 universities from all over the country who contacted and wanted to recruit me”, says Faistenauer.

The Tyrolean chose to play college soccer and study at Nova Southeastern University in Florida, more precisely in Fort Lauderdale. He played three years for the “Sharks” in Division 2, where a brief introduction to the division system in college sports is required.

Faistenauer: “The divisions are not about the sporting level, but about the general size of the university. Therefore, D2 does not necessarily mean a lower college soccer level than Division 1. For example, my university had 25 international players, some of them from academies of the Premier League, La Liga, the Bundesliga. But also from Brazil or Colombia – and that in a squad of 30 people.”

After three years and his finished bachelor’s degree, Faistenauer was looking for a new challenge. “I went to a D1 team in New York, Long Island University, to do my master’s there. It was my last year to play college soccer because athletes at U.S. universities are only eligible to play for four years over a five-year period.”

Even if he was now playing at the D1 level, the sporting level of both universities was very similar. “With a better understanding of tactics in Florida because we had more Europeans, and a faster pace in New York because there was more focus on athletics. Overall the level is difficult to classify because the level differs significantly within a league. There is no promotion and relegation, only playoffs with a winner. The worst college soccer teams were about the level of the ‘Landesliga’ or ‘Gebietsliga’ Tyrol. The best teams could certainly play in the ‘Regionalliga’.”

For Faistenauer, football was the door opener to the USA, where he stayed even after completing his university career.

After completing a Bachelor’s Degree in Business Administration in Florida and a Master’s Degree in Data Analytics in New York, the start of the professional life began.

Off to San Francisco

“I have just accepted a new job and am now working for the German Chamber of Commerce as a project manager in the Innovation Solutions division with the topics of sustainable energy, battery technology, and autonomous driving. We support German companies entering the US market.”

Workplace? San Francisco – also known to be one of the nicer cities in the USA. In June, he will go to the Californian metropolis. Currently, the home office in Miami is still on the agenda.

“Until then, I’ll be enjoying the sun here”, laughs Faistenauer, who also tells this story while being at the beach.

Even if the plan ten years ago at Bayern was different: It didn’t go bad at all, and football had its fair share of it.

Interview and article in German by Peter Altmann – https://www.laola1.at/de/red/fussball/international/sonstiges/stefan-faistenauer–usa-statt-fc-bayern-muenchen/