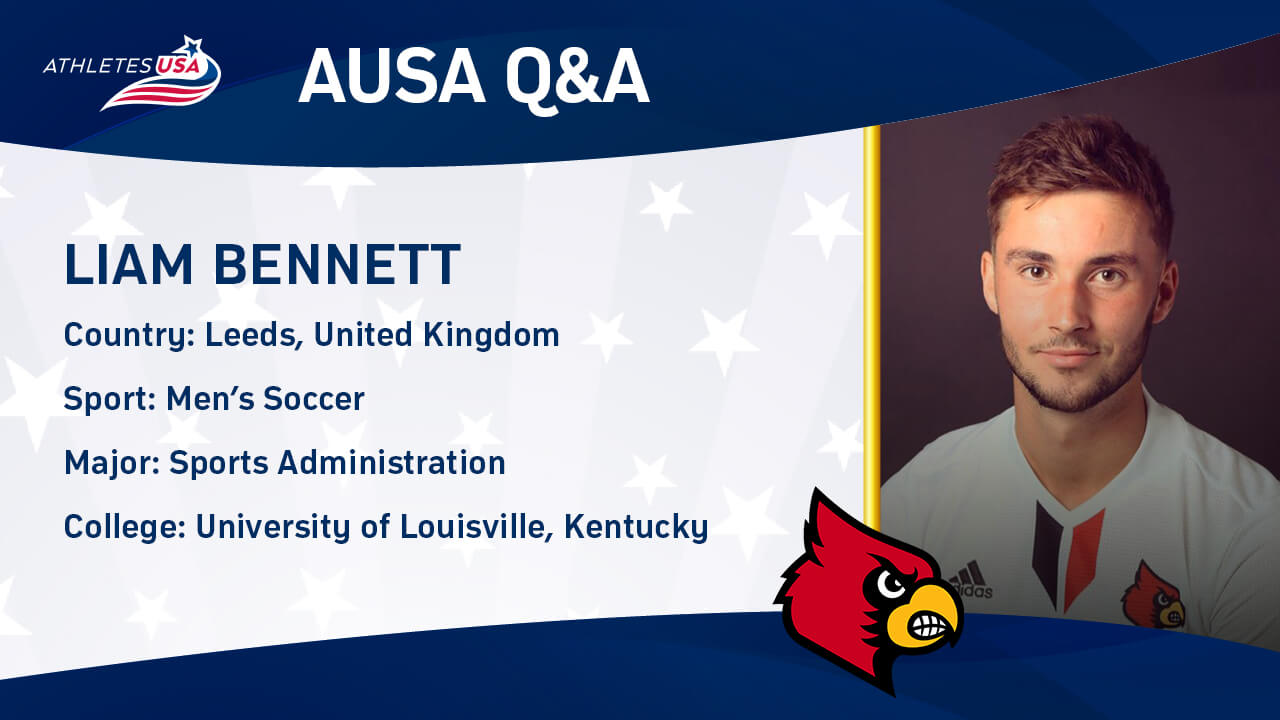 It wasn’t too long ago that former Leeds academy prospect Liam Bennett played alongside current European championship runner-up Kalvin Phillips, a.k.a – the Yorkshire Pirlo. Recently he graduated from the University of Louisville after receiving an NCAA D1 soccer scholarship.

Liam started playing for Leeds United at the age of 8. He fought his way through every age group until eventually receiving an apprenticeship with the club. A huge achievement! Liam’s highlight was playing in the FA youth cup against Chelsea at Elland Road as an apprentice. He recalls a wonderful atmosphere that night. Things (unfortunately or fortunately) didn’t work out for the Leeds-born midfielder, and he decided to trial at various clubs up and down the country. After being unsuccessful, Liam decided to seriously consider the option of a D1 soccer scholarship in the U.S. and take the necessary steps to make that goal a possibility.

How to begin the D1 soccer scholarship search?

Working through an agency, Liam took all the relevant steps such as creating a highlight real, taking the SAT, and getting his report cards from previous schools and colleges. At Athletes USA, we develop a so-called ‘profile’ or ‘CV’ of a player (Athletes USA Profile example), which is marketed to coaches throughout the U.S – other agencies will do similar. Once that was sorted and distributed, Liam began to receive interest from D1 college coaches who were offering him the prospect of a soccer scholarship in America. Clemson and Louisville, two top NCAA D1 programs, ended up being his front runners.

“I did all my research on the colleges before speaking with the coaches. During that time, I had many zoom and facetime calls and would ask them what they were looking for in a midfielder. I really wanted to recreate a schedule that mirrored what I had at Leeds United, but the most important thing was the relationship with the coach and the team.”

Ultimately Liam chose the full scholarship offer at the University of Louisville, having built a powerful relationship with the coach.

During the interview, Liam describes that he experienced a combination of nerves and excitement before jetting off to the U.S. He had some preconceived ideas. Still, everything ended up turning out even better than he had hoped for.

“The facilities, the pitches, everything was incredible. I was really impressed with everything that college soccer had to offer. The standard was similar to U21 soccer in the U.K. I also had the chance to play with players from all over the world.” 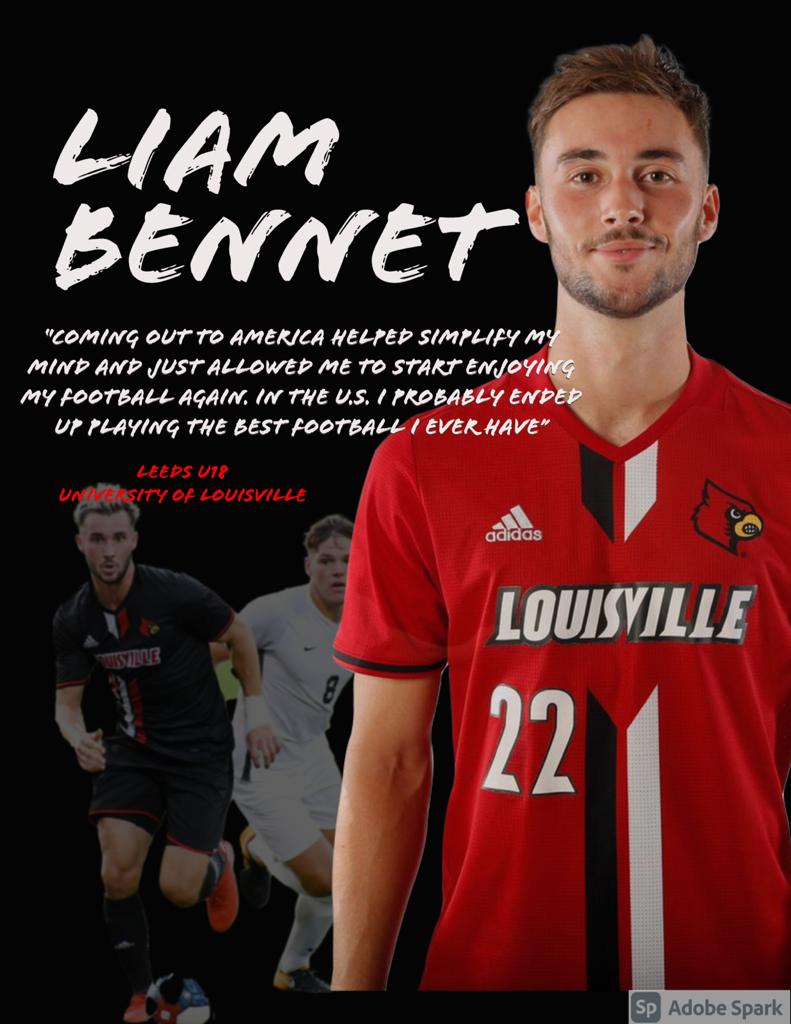 The U.K. academy system is world-renowned but can often also be a ruthless industry, as Liam experienced himself. Many players dedicate their entire childhoods to becoming professional soccer players, only to be told that they are not being kept on. For many players, this is a difficult transition to face.

“I stopped enjoying my soccer when I was playing in the academy. Although I was fortunate, I heard some really shocking stories. Coming out to America helped simplify my mind and just allowed me to start enjoying my soccer again. In the U.S. I probably ended up playing the best soccer I ever have.”

Life wasn’t all rosy for Liam either after he had to take a redshirt year as a freshman.

“Coach and I didn’t expect it, but in the U.S., you play a high volume of games in a short period of time. In the end, the coach couldn’t afford to take a risk. Especially given I hadn’t played the last few months before heading over. The intensity of the game is pretty mad. We decided that it was best to use the first year to build my fitness levels.”

From D1 Soccer Scholarship to Semi-Professional

Liam was unlucky to find himself graduating in the midst of a pandemic that didn’t allow him to trial with clubs in the U.S. Nevertheless, he graduated with a Major in sports administration and is now back in the U.S. playing semi-professionally and coaching.

Liam is a testament to the opportunities that are available to young soccerers and athletes all around the world. He reignited his spark for the sport playing college soccer, is living a life-changing experience, has a degree, and is still in America looking to forge a professional career for himself.

So how did Liam gain an NCAA D1 Soccer Scholarship? 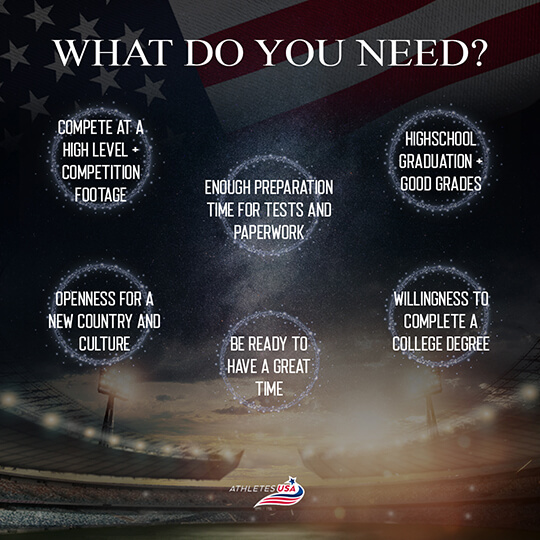 The key in the process is to start early and put in place all the preparations necessary. As Liam described, the level in the U.S. is extremely competitive and compares to U21 soccer in the U.K. If you want a D1 soccer scholarship, you need to be in and around that level. If you are currently not at the level to play academy soccer in the U.K., Germany, or Spain, the likelihood of a D1 soccer scholarship is always difficult.

However, you can still make your resume stand out and give yourself the best chances or great opportunities.

Work hard to get better! It’s a simple formula, the more and higher quality video footage from games, the more opportunities you give yourself to stand out to U.S. college coaches. Improve physically, technically, and mentally. You are now competing against the world at college, and it comes down to the smallest details. To obtain an NCAA D1 scholarship, you need to play at a recognizable level to coaches.

Take your SAT early and have your GPA ready. Coaches love to see athletes who are well prepared and have a solid academic background to offer academic scholarships.

Start the process early and work on the things you need to. Your college recruitable window opens two years before graduation. Use that time to build yourself the best possible athletic and academic CV.

Work with an Agency

Whilst it’s easy to think you can take on this process yourself, the reality is that NCAA D1 college coaches receive hundreds of emails from interested players. Working through an agency that has a good reputation for placing athletes at D1 universities and colleges will help you get to the front of that pile. It’s an investment to get better opportunities.

College coaches often don’t know the level you are playing at well enough to offer you a high-end scholarship. They want to see you up against other players in college. The best way to do this is by starting at an NJCAA (Junior College) and proving yourself. If you have the ability and show improvements, you will have much better options to find an NCAA D1scholarship. Have a look at some of our players who made that transition here – athletesusa.org/njcaa-transfer-to-ncaa-college-road-trip/