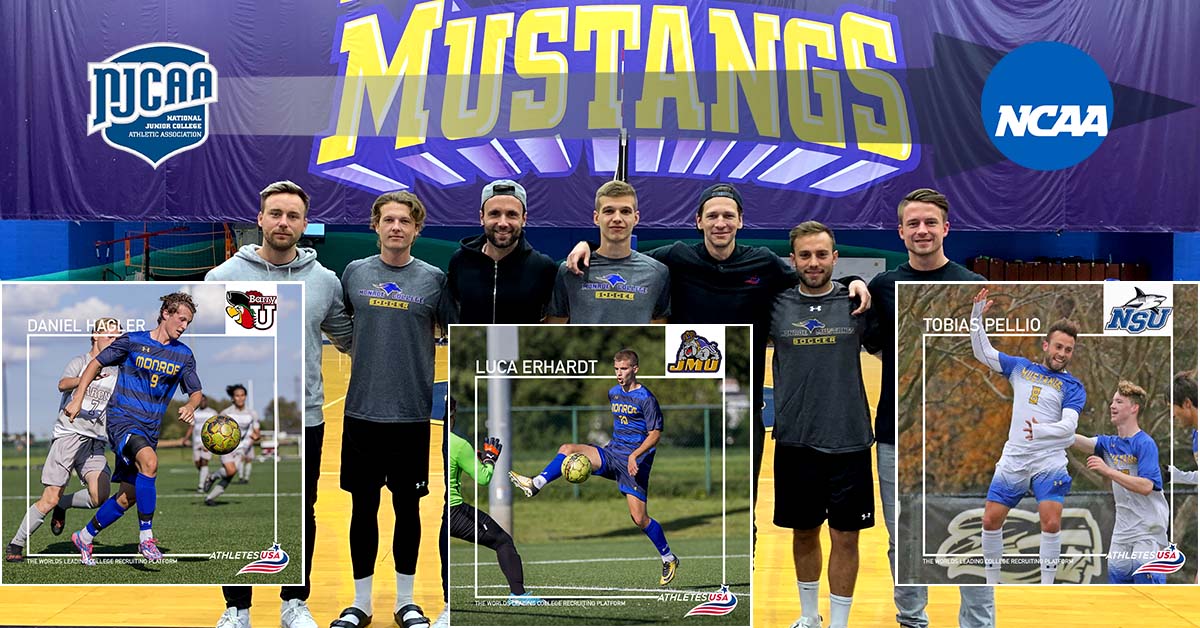 Three Athletes USA soccer players play together at the same school in New York City. As the three talents come together to compete for the Monroe College Men’s Soccer Team in the NJCAA Division 1, they complete the most successful season in the program’s history led by Head Coach Marcus DiBernardo and his staff. They win the programs first-ever NJCAA National Championship and finish the 2019 season with an undefeated record of 18-0. Their attention grabbing success opened a lot of doors for a NJCAA transfer to top NCAA programs.

Tobias Pellio, Luca Erhardt, and Daniel Haegler show us around their training facilities at Monroe College in The Bronx, NY. In an interview they talk about the great opportunities for any athlete by first playing for a top NJCAA school in the USA.

Luca, Daniel, and Tobias developed at some of the best youth soccer academies in Germany. For example, Daniel was regularly coached by Pep Guardiola (yes, the real one!) at Bayern Munich while Tobias and Luca played for Germany’s Youth National Teams. Astonishing soccer careers that continue in the USA with their historic success at Monroe College and the followed NJCAA transfer to top NCAA programs.

Daniel joined FC Bayern Munich’s U16 in 2011. For five years he developed in one of the best youth academies in the world and eventually pushed his way into Bayern’s reserve team. He even played an international friendly under Pep Guardiola against Manchester City in 2016. The competition at Bayern was unbelievable and eventually Daniel transferred to Wacker Nordhausen  and later on to Wuppertaler SV in Germany’s 4th league. After his first season at Wuppertaler SV he made the decision to combine his soccer career with studying towards a Bachelor’s degree in the USA.

Tobias spend his youth career at VfL Bochum from 2011 until 2016. Bochum’s first team plays in the 2nd Bundesliga in Germany and their youth teams play in the highest youth leagues. In 2016 he transferred to SpVgg Greuther Fürth reserves who compete in the 4th league in Germany. He also made some appearances for Germany’s Youth National Teams.

Luca played for the youth academies at Borussia Dortmund, Karlsruher SC, and Greuther Fürth. He also played on the U15 and U16 German National Team. Luca made the decision to combine studying and soccer at Monroe College in 2018.

Head Coach DiBernardo has reached the NJCAA Championship finals in 2011, 2014 and 2016, but ultimately fell in each championship game. With their 2-1 title victory over No. 4 Eastern Florida State College in 2019, the Mustangs finish a season undefeated for the first time ever. Winning all 18 of their 2019 contests, and ranked No. 1 in the nation from the first week of the rankings until the final week.

The turning point of the game came with five minutes left on the clock. The Mustangs were awarded a penalty with the scoreline at 1-1. Tobias Pellio, who scored twice in Monroe’s 3-0 semifinal victory over No. 11 Illinois Central College, was chosen to take the penalty kick. Pellio blasted it to the left, and the goalie guessed the opposite to put the Mustangs ahead, 2-1.

Luca Erhardt also collected several awards after an astonishing second season for the Mustangs. After scoring 31 goals and adding 6 assists in 18 games he is the 2019 NJCAA Division 1 Top Scorer. Luca is leading in points with 68 and was voted to the NJCAA First Team All Americans as well as United Soccer Coaches All-America First Team.

Daniel Haegler was picked to the All-Tournament Team after winning the final. In his freshman season he scored 8 goals and had 6 assists to help the Mustangs finish the 18-0 season.

After winning the highest trophy at the Junior College level all three German natives received several offers from NCAA D1 and D2 universities around the USA. In the end, Luca Erhardt made his way to Harrisonburg, Virginia to join NCAA D1 top program James Madison University.

Tobias and Daniel decided to move to Florida and join some of the best D2 programs nationwide. But they will go separate ways. At least, they will meet again because both programs play in the toughest conference in the NCAA D2. The Sunshine State Conference. Tobias Pellio accepted an offer from Nova Southeastern University in Fort Lauderdale, Florida. He already joined the team for the spring semester 2020. Daniel Haegler accepted an offer from Barry University in Miami Shores, Florida. He finished his freshman year in New York and moved to Florida in the Fall 2020.